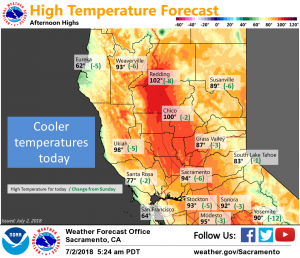 July 2, 2018 – Dry with a cooling trend over the next few days. Some smoke near wildfires. Daytime highs by mid week near or slightly below normal. A slight warm up end of the week.

Upper trough over the west coast bringing increased onshore flow today. The delta breeze, gusting to 30 knots this morning, is pushing into the Sacramento and San Joaquin valleys bringing cooling most valley locations.

Exception is the northern Sacramento valley which remains under light northerly winds this morning allowing temperatures to remain elevated. Fort Ord profiler showing the marine layer near 2000 feet and this combined with increased onshore flow and cooler airmass will bring cooler temperatures today most areas.

Smoke from the County Fire in western Yolo county will likely spill into the southern Sacramento and northern San Joaquin valleys this morning thanks to the onshore surface flow. Otherwise generally stable conditions will bring fair skies today.

Airmass continues to cool on Tuesday bringing down temperatures to just a bit above normal for this time of year. An upper low now in the Gulf of Alaska will dig southward into the eastern Pacific over the next couple of days deepening the trough off the coast and bringing still more cooling and continued onshore flow.

By Wednesday, daytime highs should actually be a bit below normal. Little change expected on Thursday as Norcal remains under stable southwest flow aloft and moderate onshore surface winds.

Dry conditions expected across interior NorCal under broad troughing over the West Coast. Locally breezy southwest winds expected at times, especially over the mountains and near the Delta. The upper trough might have a chance to tap some moisture, bringing some high clouds and perhaps a few showers over the northern areas on Friday. The upper system will eject northward as high pressure builds into NorCal late this week. Therefore, a gradual warming trend is expected during the extended period. The northern Sacramento Valley could reach the century mark early next week.