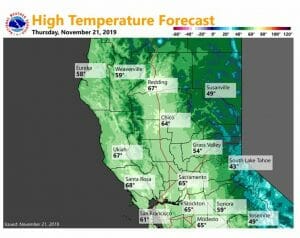 The Red Flag Warning and the Winter Storm Warning have been canceled.

Satellite imagery shows the upper low now located over far southern Nevada with east northeast flow across NorCal on the backside of the system. Skies are mostly clear across interior NorCal except for low clouds banked up against the Sierra east of the crest and across portions of the southern Motherlode.

Pressure gradients continue to relax as the KMFR-KSAC gradient is now down to 5 mbs. Local gusts of 15-30 mph persist across the northern half of the Sacramento Valley and surrounding terrain, but will subside through the morning as gradients relax further.

Next incoming trough forecast to split off the coast later today with the southern portion dropping southward tonight to form another closed low off the coast of SoCal on Friday while ridging builds across NorCal. Ridging is forecast to hold through the weekend resulting in lighter winds, milder daytime temperatures and cool nights.

One more day of above normal temperatures and dry conditions is expected Monday before a cooling trend begins with the potential for widespread precipitation.

Global ensembles continue to advertise a pair of systems to impact the region during the Monday through Wednesday (November 25-27) timeframe. To start the week, another amplified shortwave is expected to move from the Pacific Northwest into the central Rockies. This setup would enhance height/pressure gradients allowing for a period of dry, northerly winds on Monday into early Tuesday. Winds are not expected to be as strong as the current system, and humidity levels may not be as low but given extremely dry fuels, elevated fire weather concerns will continue to need to be monitored.

Moving into the Tuesday/Wednesday period, model guidance continues to advertise an upper trough tracking into the West Coast. With the stagnant ridge over the east Pacific retrograding west, confidence is improving that this will allow the trough to bring well needed precipitation back to the region.

Based on the latest models, have maintained cooling temperatures along with increasing precipitation chances. Tuesday night and Wednesday could potentially see heavy snowfall in the Sierra accompanied by strong winds. This will continue to be monitored given busy Thanksgiving travel over the major mountain passes.