December 17, 2018 – Weather system exits to the east today with drier weather returning for much of the region. The exception will be the far northern portion of the state which will continue to see precipitation through Tuesday. Another weather system will bring a chance of light precipitation by the end of the week.

Rain continues across the southeastern half of the forecast area early this morning as the frontal system slowly progresses through the region. Precipitation amounts over the past 12 hours have been generally around an inch across the Central Valley with 1 to 2 inches over the northern mountains. The front has been slow to make it into the northern Sierra so far and amounts there have been generally under half an inch. 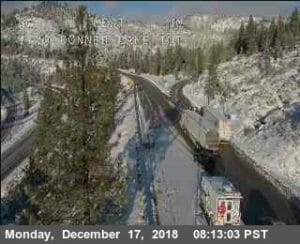 Winter storm warning has been downgraded to an advisory across the northern Sierra as snow levels have been slow to lower. A quick shot of snow near the pass levels will be possible this morning before precipitation tapers off by this afternoon. The main part of the system clears the valley early this morning.

Ridging builds into NorCal in the system`s wake for a return to dry weather for much of the region. The exception will be the far northern portion of the forecast area where warm-advection ahead of the next system moving into the PacNW will continue precipitation into Tuesday.

A third system will drop down in northwest flow later Thursday bringing another chance of light precipitation to NorCal.

The longwave pattern across the Central/Eastern Pacific continues to churn out a series of systems which take aim at the West Coast. Sorting out the finer details of each particular system will remain a challenge, particularly in light of the ensemble model spread.

After a wet conclusion to the work week, the beginning of the weekend should be dry across the region. Impacts from the next Pacific shortwave trough are expected to move through as early as late Saturday night. However, there are not only differences between the GFS and ECMWF models, but they also exhibit uncertainty on a run to run basis. While not a wash out by any means, daily chances for precipitation are likely into Sunday as well as Christmas Eve. It is worth noting these systems currently lurk out over the Western Pacific so much can change in the upcoming days. High temperatures throughout the period should stay close to mid/late December climatology. Mid to upper 50s across the Valley and low to mid 40s over mountain locales.