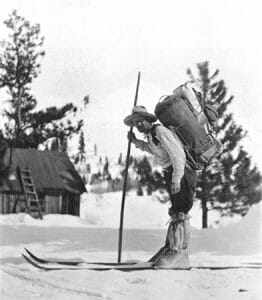 December 31, 2018 – John Albert “Snowshoe” Thompson stood 6-feet tall with piercing blue eyes and a beard of wired blond. He had a physique of solid braided muscles and spoke English with a Norse accent sometimes offering a word or two in an old Viking dialect to boot.

Thompson’s Norwegian family, including nine brothers and sisters, immigrated to the United States in 1837 when he was 10 years old to homestead in Illinois. At age 24, he saw many of his neighbors leaving their farmlands in search of a new life out west.

Thompson’s memory of his native Norway included mountain peaks he loved climbing as a youngster with his dad. Taking all he knew and learned from his father, Thompson headed out west to arrive in Hangtown (Placerville) and took up a mining job with another family member.

In a year’s time he bought a small ranch on Putah Creek. There he made little profit, spending most of his time living off the land for survival and entertainment. Thompson heard that the mail was very unpredictable in its deliveries over the Sierra, sometimes delayed for weeks by winter storms. He answered an ad in the Sacramento Union for a mail carrier to travel from Hangtown to Genoa, Nevada (Carson Valley) in the mid 1850s.

Putting his best foot forward, Thompson arrived at the interview with a pair of skis he had made from two pieces of oak that weighed about 25 lbs and were 10-feet tall. The skis were constructed from memory of people back in his hometown village of Telemark, Norway. Thompson strapped the skis on and around his ankles with a crude mesh of leather ropes he used as ski bindings. He sailed down the mountainside as a crowd gathered to witness a feat few had ever seen or heard tell before in America.

Although Thompson’s father died when he was just 2, he had heard of the incredible outdoor skills his father possessed and what he learned on that topic proved most valuable. Winter was more brutal in Norway and the temperatures were considerably more severe.

As a result, Thompson drew upon a type of fortitude and knowledge of winter storms that only others from his homeland could identify. The skills proved invaluable while negotiating winter in the Sierra.

For instance, Thompson reportedly didn’t carry a compass, yet never got lost even while blazing new and faster routes. He customized his treks based on snow pack and each individual run.

Sometimes the mail pack would weigh 60 to 100 lbs. Along with the mail, Thompson would carry jerk meats, bread and grains to keep his weight down for the journey. He slept under trees as well as several caves he discovered over the years along his 90-mile “Ironman.”

Thompson would sometimes sleep standing up and never carried a gun yet fought or ran off wolves as necessary. Along his way, Thompson was credited for planting the first fruit trees on the Eastern Sierra slopes of Nevada. He also dug the first irrigation canals in the newly formed Nevada Territory on the southern pass of Lake Bigler (Lake Tahoe) of the Nevada/California border.

Thompson carried the first ore samples from Virginia City to Sacramento City in 1858-59 and helped carry the original printing press later used for the Territorial Enterprise in Virginia City a few years later. The newspaper became one of the most important printed editions between Chicago and San Francisco, made in part because of Mark Twain’s gift of rhetoric and satire.

Thompson married his girlfriend of 10 years in 1863, Agnes Singleton, whom he met in Mottsville, a community near present day Minden, Nevada. Together they had one son. Snowshoe Thompson died in 1874 and his son died two years later at 11 years of age. He is buried next to his mother and father in the Genoa Cemetery.

Snowshoe Thompson was the first person to single-handedly standardize national mail routes: Three days from Hangtown to Genoa and two days coming back. This advancement transitioned mail delivery across the United States, before the railroad was completed, to be sure and reliable.

One thing that occurred to me as I read about Showshoe Thompson is because of his abilities to soar over the Sierra and deliver mail which was predictable and certain, even in horrendous snow storms, he literally connected the East to the West, family by family, letter by letter. In my opinion John Albert Thompson won the west for all of us to this day. John Albert Thompson did more for the American West one letter at a time than any other American I can think of, and he did it first.”

While a pioneer conquering the slopes of the Sierra on a regular basis, Thompson delivered Harper’s Weekly Magazine. Harper’s was published from 1850 to 1914 and was the current day CNN of America.

At the time, Snowshoe was the only information carrier traveling from east to west. Thompson earned a moniker as the “Birdman of the Sierra,” for traversing the mountains to deliver the country’s news on his back from Sacramento Valley to Carson Valley and back again.

His actions served loved ones wanting to know if a family member made it west or dispersing important new developments from the U.S. government. Tales were told of heroic acts of bravery and self-endurance to save people’s lives along the way.

In Plumas County 1851, Norwegian-born Charles Nelson (Nelson Creek) settled in Johnsville. He and his crew were mining on Eureka Peak. Nelson built skis 12-14 feet long that he remembered from his homeland in Scandinavia. They called them Longboards.

Miners in California found out gold doesn’t just hang off the roots of every plant as it was advertised in several magazines and newspapers back East. Times were tough and morale hit rock bottom during the winters of 1853-55. Many arrivals were sick with cholera and influenza enduring conditions of cold and damp.

Charles Nelson offered a distraction solution to conditions; he organized ski races. The events were the first of their kind in the newly formed state of California and were welcome as a friendly diversion for all of those suffering from exhaustion and exposure to the elements. 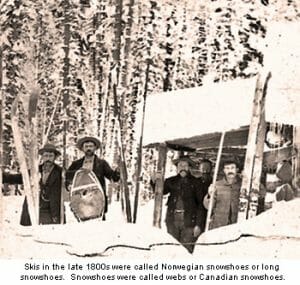 Back in the 1850s, winters were much harsher. The season started in September and would likely thaw in June or July. The races became so popular that the purse could be as high as $700 to $1000 … per race!

Snowshoe Thompson caught wind of the races and big prizes as well as stories of Plumas County racers sailing at speeds of 80 mph. He accepted the Alpine vs. Plumas Longboard challenge.

Likewise, many of the Plumas Longboard champions relished a chance to race the most famous skier of the era, the Birdman of the Sierra, Snowshoe Thompson.

Thompson made his way over to Plumas County by way of Camptonville and Poker Flats to what is now Plumas Eureka State Park and the historic Johnsville Ski Bowl. Nelson and his posse sported skis five feet longer than Thompson’s and those first Plumas Longboarders won the race. Thompson noticed the Longboarders used some kind of “dope” on their skis, a type of wax mixed with something the racers highly guarded as, a secret weapon.

The U.S. Government did not pay Thompson for his mail deliveries. Before his death, he sought a $6,000 claim for the 20 years of service provided preceding the transcontinental railroad in 1869. He was never paid and his mail delivery days ended soon after the railroad was complete.

For the special deliveries of ore from the Comstock Lode, he had been paid a guaranteed fee for the Virginia City to Sacramento City transports of very valuable content.

Being a guide out there for the past 24 years, I can sort of feel his incredible accomplishments, guide trip by guide trip, river by river. I can take a small slice of his world and identify with this great man. John Snowshoe Thompson delivered and connected a nation on his back, letter by letter, mountain peak by mountain peak, possible with one of your ancestor’s letters, won the West for all of us today, and his ultimate payback, being remembered as the Father of Skiing in America.

Author Jack Trout was born and raised in Plumas County. A graduate of Portola High School, Jack has been a  fly fishing outfitter for the past 25 years who provides guide trips on the Yuba and the Feather Rivers. He is a freelance writer whose historic articles appear in several publications throughout California. Learn more on his website.