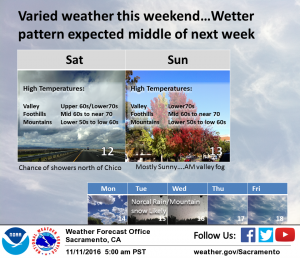 November 11, 2016 – Dry with above normal temperatures Today with a slight chance of showers tonight into Saturday for the coast range, western Sacramento valley and northern CWA. Mainly dry Sunday and Monday. A frontal system impacts the area Tuesday into Thursday with more rain and snow and below normal daytime temperatures. Snow levels potentially below 5000 feet by Wednesday.

Fair skies this morning and today under high pressure over the western U.S. As a result, patchy fog has developed again from the central Sacramento valley southward into the northern San Joaquin valley. For the most part, the fog should remain fairly light but some dense patches will be possible.

A weak Pacific frontal system will approach the coast today. The main impacts will be some occasional high cloudiness and cooler temperatures although highs today are still forecast to come in several degrees above normal. As the Pacific front moves inland tonight it will take a more northeasterly turn as it is lifted over the western U.S ridge.

Much of the coast range and northern mountains will see a chance of rain by Saturday morning but precipitation amounts will be on the light side. Areas north of about Oroville will see a chance of showers during the day on Saturday as the frontal band slips to the east but again amounts will be quite light. The cooler airmass behind the front should bring down highs on Saturday but highs are still forecast to come in a little above normal.

Upper ridging rebuilds on Sunday bringing a return to fair skies and daytime highs back up to several degrees above average. This small scale high breaks down quickly on Monday in response to another Pacific storm system forecast to approach the coast. Most locations will stay dry through the day Monday with similar temperatures to Sunday. Exception could be northwest Shasta county which could see a few light showers by late in the day as this initial front moves inland.

Ridge continues to shift east on Tuesday as upper level trough approaches the area and brings a rather strong frontal system with it. As mentioned by previous shift, models continue to slow forward progress of the system so have slowed precip chances a bit to match up with latest trends.

Precipitation will move in from the NW during the day Tuesday and move across the area through Wednesday, heaviest late Tuesday night into Wednesday. Obviously, some uncertainty remains this far out with exact timing and details.

System doesn’t look overly wet but does bring in some much cooler air with it. This should serve to rapidly drop snow levels as the front moves through with accumulating snow possible down to around 4000 feet. This will likely cause travel impacts across the passes late Tuesday through Wednesday.