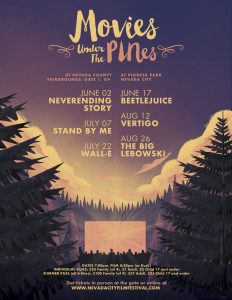 May 16, 2017 – Nevada City Film Festival presents Movies Under the Pines (MUTP), an outdoor cinema experience, returns to Pioneer Park and the Nevada County Fairgrounds this summer with screenings of such classics as Wall-E, Beetlejuice, Stand By Me, The NeverEnding Story, Vertigo and The Big Lebowski.

Building on the success and excitement of the last four summers of screenings, the Nevada City Film Festival will host two screenings a month from June to August. For each screening the festival will bring in state of the art projection and sound, plus offer an array of pre-show food and drink options, specialty cocktails, entertainment, games, and more.

“With all the great events this community has to offer, MUTP stands out,” says Harrison Dockter, the event’s new producer. “It’s a very special way to spend a summer night.”

Dockter curated this year’s films with a wider audience of film lovers in mind.

The season kicks off on Friday, June 2 at the Nevada County Fairgrounds with The NeverEnding Story, an epic fantasy film based on the novel of the same name by Michael Ende, about a boy who reads a magical book that tells a story of a young warrior whose task is to stop a dark storm called the Nothing from engulfing a fantasy world.

Stand by Me, the coming-of-age drama, directed by Rob Reiner and starring Will Wheaton, River Phoenix, Corey Feldman and Jerry O’Connell. Based on Stephen King’s novella The Body tells the story of four boys in a small town in Oregon who go on a hike to find the dead body of a missing child.

Everyone loves Pixar films because they are funny, clever, creative and exhibit great storytelling. This summer MUTP will screen the animated favorite Wall-E. Set in the far future where humans have left Earth because of all the garbage pile-up, a robot named Wall-E and his cockroach friend Hal are the only known inhabits. However, all that changes when Wall-E meets a beautiful robot named EVE and falls in love with her.

Considered the ninth-greatest American movie of all time, Alfred Hitchcock’s Vertigo stars James Stewart as former police detective John “Scottie” Ferguson. Scottie is forced into early retirement because an incident in the line of duty has caused him to develop acrophobia (an extreme fear of heights) and vertigo (a false sense of rotational movement). Scottie is hired by an acquaintance, Gavin Elster, as a private investigator to follow Gavin’s wife Madeleine (Kim Novak), who is behaving strangely. The film was shot on location in San Francisco.

“I’m so excited to share my love of cinema with happy movie lovers this summer,” says Dockter.

Beer, wine, popcorn, and soft drinks available for purchase. Outside food and drink allowed. No outside alcohol. Blankets and low back chairs are suggested.

WHAT: Nevada City Film Festival presents Movies Under the Pines

Tickets are available online at www.nevadacityfilmfestival.com or at the gate