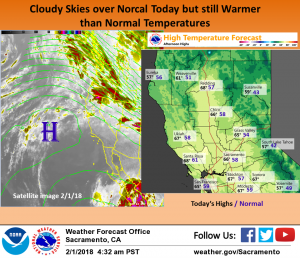 February 1, 2018 – Dry and mild for the next week with above average daytime temperatures. Areas of night and morning valley fog will be possible.

Upper level high pressure ridge slowly building over the eastern Pacific and west coast. IR Satellite imagery showing high and mid level cloud cover spilling over the ridge and in to NorCal this morning. This cloud cover is keeping morning temperatures several degrees warmer than 24 hours ago and keeping morning valley fog at a minimum. Overall airmass warms a bit today as the upper ridge slowly amplifies so should see a slight bump up in maximum temperatures from Wednesday but cloud cover should keep temperatures from climbing much.

Daytime highs are expected to come in between 10 and 15 degrees above normal. Most locations should come in a few degrees below record but a few may come close. Saturday looks to be the warmest day of the short term period with daytime highs pushing close to record territory. A shortwave disturbance moving through the Pacific northwest will bring a slight cooling on Sunday but otherwise have little impact. Mainly fair skies will keep night and morning valley fog in the forecast through the weekend.

Persistent high pressure continues to create warm and dry weather through at least the middle of next week. High temperatures at or above 70 degrees are expected across much of the Valley and foothill locations. The northern Sacramento Valley will be warmer than the rest of the valley due to northerly winds creating some dry adiabatic warming. Morning fog will be possible in the Valley, though might be limited due to drier conditions and northerly winds.