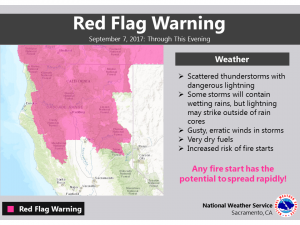 September 6, 2017 – The National Weather Service in Sacramento has issued a Red Flag Warning, which is in effect from 4 AM to 8 PM PDT Thursday.

* THUNDERSTORMS: Scattered thunderstorms will be possible with some wetting rain, especially for the mountains. Lightning may strike outside of rain cores.

* OUTFLOW WINDS: Gusty, erratic winds are expected near any thunderstorms that develop, up to as strong as 40 mph.

* TIMING: Late tonight into Thursday evening. The most widespread thunderstorms are expected Thursday afternoon in the mountains from an east to west line through the state from Plumas County northward.

* IMPACTS: any fires that develop from lightning strikes may spread rapidly.

A Red Flag Warning for abundant lightning means that frequent lightning may increase fire starts for the warned area. A combination of fire starts from lightning and gusty strong outflow winds in thunderstorms can contribute to extreme fire behavior.