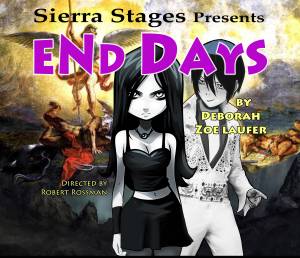 NEVADA CITY, Calif. November 4, 2016 – Sierra Stages is pleased to announce open auditions for the first production of its ninth season – the rapturously funny comedy “End Days” by Deborah Zoe Laufer. “End Days” is directed by Robert Rossman, and will play from March 2- 25, 2017 at the historic Nevada Theatre in Nevada City.

Sixteen-year-old Rachel Stein is having a bad year. Her father hasn’t changed out of his pajamas since 9/11. Her mother has begun a close, personal relationship with Jesus. Her new neighbor, a sixteen-year-old Elvis impersonator, has fallen for her hard. And the Apocalypse is coming Wednesday. Her only hope is that Stephen Hawking will save them all.

“End Days” received a rolling world premiere in 2008 through the National New Play Network, and went on to receive over 50 productions after that. Laufer is an active contemporary playwright whose works have been produced at Steppenwolf Theatre Company, Cincinnati Playhouse in the Park, Actor’s Theatre of Louisville, Portland Stage, and eighty other theaters around the country, in Germany, Russia and Canada. She is a graduate of The Juilliard School and a member of The Dramatists Guild.

There are two opportunities to audition: Thursday, November 17 at 6:30 p.m. and Saturday, November 19 at 10:00 a.m. Auditions on both dates are at the Sierra Stages Rehearsal Studio, 343 Railroad Avenue in Nevada City. (Directions are on the Sierra Stages website.) All roles are open. All roles are unpaid. For important information about auditions, please visit http://www.sierrastages.org/auditions.html. If there are questions about auditions, please send e-mail to [email protected] or call Sierra Stages at (530) 346-3210.

Sierra Stages is a nonprofit community theatre based in Grass Valley and Nevada City that has presented 30 plays and musicals at the Nevada Theatre, Off Center Stage, Miners Foundry and The Center for the Arts over the past eight years. Its productions have been recognized with 58 Elly Award nominations in the comedy, drama and musical categories. For information about Sierra Stages, visit www.SierraStages.org or call 530.346.3210.