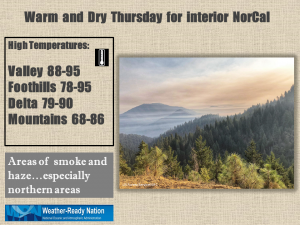 September 6, 2018 – No precipitation expected through the extended period. Near normal temperatures today, warming Friday then back to near normal over the weekend and early next week. Cooler than normal middle of next week. Areas of smoke and haze from wildfires will persist.

Temperatures running a few to several degrees cooler in delta influenced areas this morning thanks to a slightly stronger delta breeze. Elsewhere, temperatures are running similar to 24 hours ago. As far as high temperatures today, a weak shortwave trough moving through the Pacific Northwest and Norcal will bring a slight cooling across the northern CWA. Otherwise temperatures will come in similar to yesterday or right around normal for this time of year.

Southwest flow aloft should keep any shower or thunderstorm activity south and east of the CWA with mainly clear skies continuing.

Haze and smoke will still be around however due to multiple Norcal wildfires with heaviest smoke expected in the northern Sacramento valley and surrounding areas.

Upper ridge rebuilds on Friday bringing a several degree warm up. Upper ridging will bring more stability for continued fair skies and generally lighter winds. A couple of shortwaves are forecast to move through the Pacific Northwest over the weekend. This should bring daytime highs back down closer to normal as norcal comes under increased onshore flow. Sierra may see breezy winds Saturday afternoon as the first of these weekend systems passes to the north.

The upper trough over the northeast Pacific will continue to deepen along the West Coast early next week, with both the GFS and ECMWF keeping it there through much of next week. At this stage, it looks like the best chance of showers with this pattern will remain just to the north of our forecast area, though forecast confidence on how strong this trough will be isn’t very high at this stage. Current progs have temperatures within a couple degrees of normal early next week, but dropping to upwards of 10 degrees cooler than normal by mid-to-late next week.