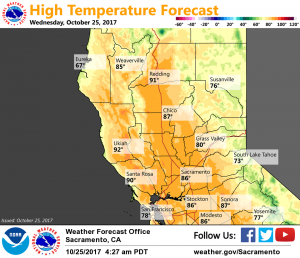 October 25, 2017 – Dry and warm weather continues through the weekend.

Clear skies across the region with relatively mild temperatures. Current temperatures range from the 30s in the mountain valleys to the 50s to mid 60s in the Central Valley. Winds are considerable lighter across most of the region, though enough easterly gradient remains for some locally gusty winds along the west facing canyons of the northern Sierra Nevada.

Dry and mild weather will continue into the weekend as strong high pressure remains along the West Coast.

A weak upper trough dropping southward through northern California will bring a slow cooling trend Sunday through Tuesday. Daytime highs will drop a few degrees each day but still come in just a bit above normal by Tuesday. Models remain consistent in keeping any precipitation chances well west of the region. Breezy north winds develop behind the trough as it drops southward but are not expected to become significantly strong lacking upper level support.

Models diverge somewhat by the middle of next week. GFS and GEM bring enough ridging for continuation of dry conditions. Latest version of ECMWF brings a shortwave disturbance and a shower threat across the far north state Wednesday afternoon but this model has had poor run to run consistency and rejected for now.