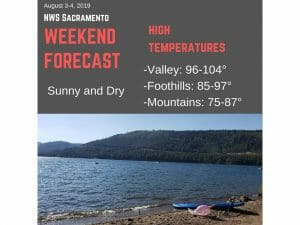 August 2, 2019 – Temperatures are forecast to be near normal today, rising a little above normal over the weekend, peaking Saturday. Winds will mostly be from the south with a Delta Breeze. Dry weather continues next week with a gradual cooling trend.

Temperatures will be a few degrees warmer today as high pressure ridging centered over the Four Corners expands into the region. This trend continues on Saturday, with afternoon highs rising another 2 to 5 degrees. The Delta Breeze continues, allowing for influenced areas to cool off back into the upper 50s to lower 60s overnight.

Valley temperatures Saturday afternoon will generally peak in the upper 90s, with low 100`s over the northern Sacramento Valley. Up in the mountains, continued dry weather persists with daily highs in the 70s into the 80s.

Sunday will be similar, with a gradual cooling trend Monday into Tuesday as an upper low from British Columbia approaches.

Little change to the extended forecast this morning. The upper level ridge will be suppressed back the the Desert Southwest due to a persistent trough moving closer to shore. Overall, the main feature that will come with this pattern change is a decrease in high temperatures. The upper 80s to lower 90s may be the norm across the Valley while the 60s and 70s are confined to the higher terrain.

Given the trough sitting offshore, there is a some concern as to whether or not we will see any convective activity. Guidance depicts some favorable parameters over the Cascades, Klamath, and Trinity Alps, which just clips the northern portion of our CWA. Confidence is too low as of this time to add any PoP or thunder outside of NBM guidance but it’s worth keeping an eye on over the next few days.