While the El Nino Southern Oscillation (ENSO) climate pattern often influences the winter, neutral conditions are in place this year and expected to persist into the spring. In the absence of El Nino or La Nina, long-term trends become a key predictor for the outlook, while other climate patterns, such as the Madden-Julian Oscillation and Arctic Oscillation (AO) will likely play a larger role in determining winter weather. For example, the AO influences the number of arctic air masses that intrude into the U.S., but predictability is limited to a couple weeks.

“Without either El Nino or La Nina conditions, short-term climate patterns like the Arctic Oscillation will drive winter weather and could result in large swings in temperature and precipitation,” said Mike Halpert, deputy director of NOAA’s Climate Prediction Center.

This spring saw significant and historic flooding across the central U.S. that impacted nearly 17 million people. However, during the summer and early fall, drought rapidly developed across much of the South, with drought conditions now present across approximately 20% of the country. 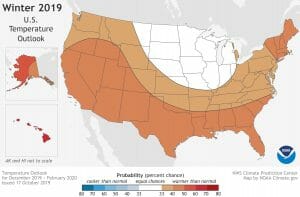 NOAA’s seasonal outlooks provide the likelihood that temperatures and total precipitation amounts will be above-, near- or below-average, and how drought conditions are favored to change. The outlook does not project seasonal snowfall accumulations as snow forecasts are generally not predictable more than a week in advance. Even during a warmer-than-average winter, periods of cold temperatures and snowfall are expected.

NOAA’s Climate Prediction Center updates the three-month outlook each month. The next update will be available on Nov. 21.

NOAA produces seasonal outlooks to help communities prepare for what is likely to come in the months ahead and minimize weather’s impacts on lives and livelihoods. Empowering people with actionable forecasts and winter weather tips is key to NOAA’s effort to build a more Weather-Ready Nation.